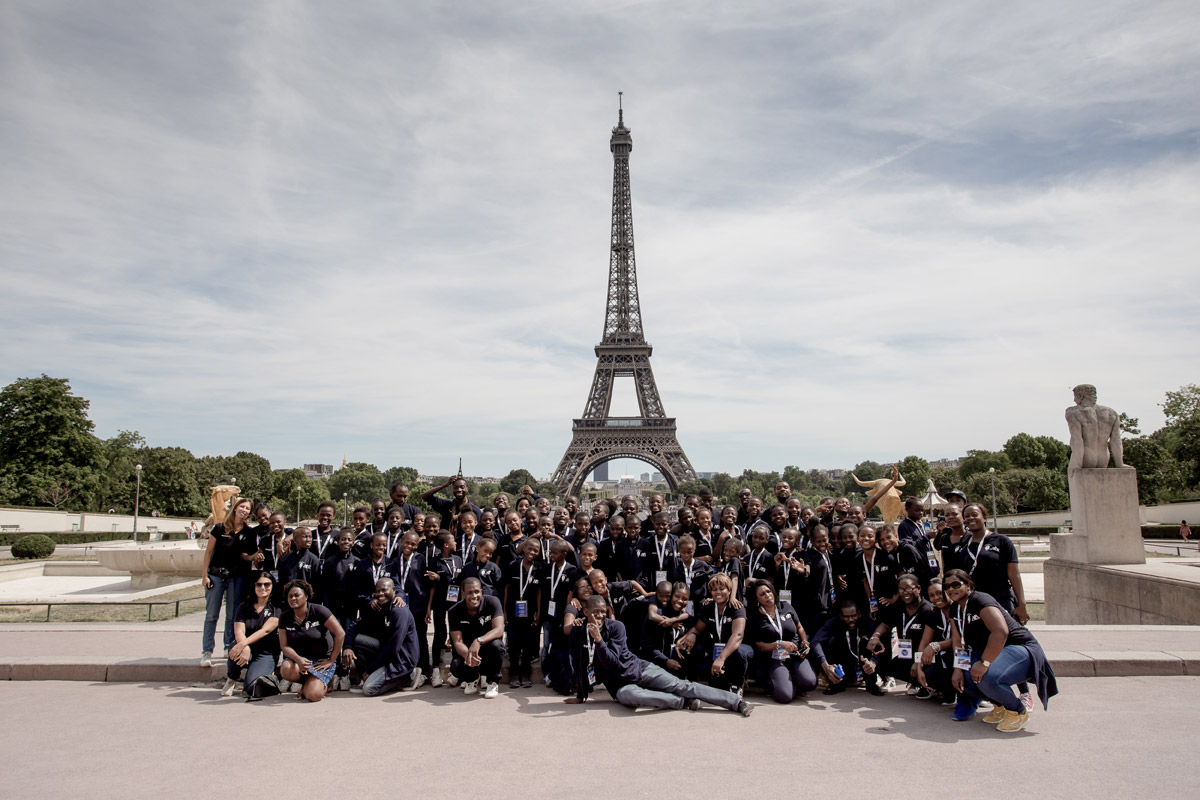 Where is time, where has it gone, how comes it has already passed, this is something that many are asking for, children and adults, Haitians and Italians. ‘Yesterday’ they had arrived from Paris, now they are leaving for Paris from a very hot Rome, early in the morning. But then the memory of the many stages where these young voices have already been, the applause, the mishaps, the races (the playful ones, the ones to be on time), the monuments, the many meetings and the beautiful people, and all those who have given the best of themselves, around this project.

Time had come, inevitably, for tears and hugs, while the coach had already the engine on, and Luca Rossetti and Guglielmo Magagna (the former photographer, video maker the latter) were undergoing the sweet siege of so many small arms around their necks…

Then, towards the airport, destination Paris. A city, that knows how to impress visitors, especially on the first meeting. Paris in fact always plays its most fascinating card, the one of its ‘Grandeur’. Rome is Rome, but Paris captured the attention of the whole Haitian delegation, leaving them totally breathless. The Eiffel tower was the subject of photo-shoots and selfies in each pose, followed by the Champ de Mars, Place du Trocadéro, strolling along the Seine, enjoying the city in cheerfulness…

The tour continued by coach up to Place de la Concorde. And then, once again, walking along des Jardins desTuileries, strolling around the Champs-Élysées, and down to the Louvre, to its famous glass and steel pyramid, a background for a noisy and cheerful group photo. About photos, we did not miss out Place Vendome, and the Opéra National de Paris. Finally, from far, Notre-Dame cathedral, (since the Île de la Cité was inaccessible, because of works) and passing through ‘Les Invalides’, the group reached the hotel, exhausted, waiting for the last dinner of the tour.

A Canadian poet once wrote that the only rule of a trip is not to return as we left. We should come back different. Not only have Voices of Haiti followed this precept, but also – we believe – those who have traveled with them physically, and those who have done it simply listening to them while singing.

Jubilate Deo: the canon that our kids have performed in the Baptistery of Pisa, but also in front of the Leaning Tower, and in Rome, and also on the hills of Lajatico, where Andrea grew up, singing. The Latin expression is related to that, with no music, and yet musical, that is rebounding in the heart of the subjects involved. One lemma: – ‘thank you’ – so common and yet out of common… The next period will not be a mere list even though it looks like it. It will be, in case, bouquets of flowers hidden among letters: a sincere embrace, from the Foundation, to all those who have been protagonists (and – as the founder says – should ideally call ABF with the initials of their name).

Thanks, therefore, in no particular order, to Monsignor Alfred Xuereb, to the Prefettura Vaticana, to the Direction of Vatican Museums, for having given the unforgettable experience that started last Wednesday with the opportunity to sing for the Holy Father almost during the entire general hearing.

Thanks to Sandro Veronesi and the Calzedonia Group, to the staff at Gipi DuePisa Hostel, Dsquared2, D’Acquasparta, Fondazione Stelios, Bob Book and his family, Richard Azar and his family, Illy family, Bartalini family, Oscar Scirè, at Waste Recycling, Blackfin and Dario Pizzardi; Thanks to the Fondazione Zeffirelli, to the City of Florence, to the Association Teatro del Silenzio, to the Bank of Lajatico, to all the friends of City Sound, to Mercatone della calzatura, to Enrico Preziosi and his family, to Massimo Borrelli and all to the ” Faruk “, to the Pergola Theater, to the Giglio Theater. Thanks to the wonderful ABF volunteers, to ABF and Saint Luc team, to Stefano , Regine and Lorenzo Aversa, Gerald Beaubrun, to the teachers of the choir, to Carlo Bernini, Sophie Aversa, Anna Giulia Mannucci, Vasthie Pierre, Massimo Nebuloni, Alex Monti, Nicoletta Calderoni, Luca Casini, Stefano Scozzese, Rossana Dian and Sara Formicola, Emeline Michel, Luca Rossetti, Guglielmo Magagna e tutti alla Run Multimedia, Lorenzo Montanelli, Andrea Taglia e Francesco La Camera…

Thanks to the Commission of Voices of Haiti. The members, the directors and teachers of the schools in Haiti took care of the kids every moments during the trip.

Thanks to all the people who have supported and encouraged this adventure, to those we have run into, and have smiled. To those who have applauded the children, and to those who, reading these words, have followed us, with their heart.

Above all, thanks to Andrea, Veronica, Matteo, Amos and Virginia.

Laura Biancalani is the institutional spokesman for this long sequence. Laura is the European mother of many children in the world, of these who have recently embarked on a flight to Port-au-Prince, as well as of the over 2500 who, thanks to the ABF teaching facilities – along with their local partner Saint Luc – are studying and growing, just like many other children in the world, who will soon be involved in the projects of the Foundation named after Bocelli.

Laura, last night, reiterated to the young members of the choir and to their accompaniers, that message that can be contained in one word and that contains them all: ‘together’. ‘Only together, just pushing everyone in the same direction, dreams can come true, even when they seem impossible to accomplish. I think this is the biggest lesson we can leave to these children.

And we agree, ready, together, to roll up our sleeves and to start once more.