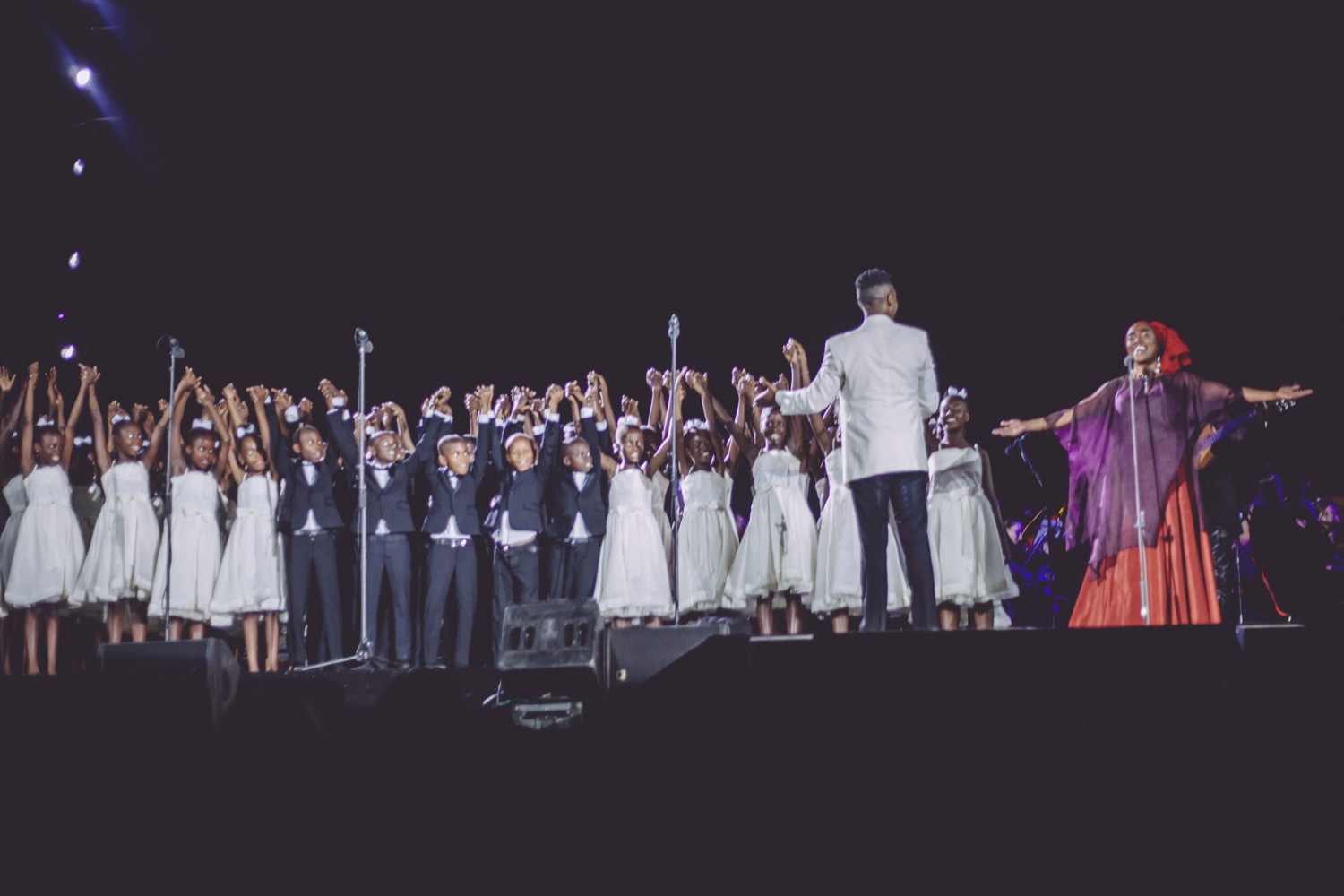 «Stay hungry, stay foolish, because only those who are crazy enough to think they can change the world they really change it»… Hungry for dreams, for life and hope, foolish to the point of daring, without hesitation, faithful to one’s values. The famous admonitions of Steve Jobs ( who was, years ago, among the public of the Teatro del Silenzio), come back to mind in front of the ‘Canto della Terra’, that last night succeeded in the magical, capturing, virtuosity of bringing the world on stage, in the open countryside.

Lajatico, from rural heart of Tuscany, has been transformed, for one evening, into the heart of everywhere in the world, demonstrating how art can be used to break down every boundary. On stage, apparently distant languages have been married in a song that has embraced the whole globe, giving way to a baroque delight of contributions, now ironic, sensual, now delicate and poetic, now overwhelming, irreverent or even circuslike… Three hours holding the breath, for a brave pastiche full of special effects, for a very colorful kaleidoscope of variations – musical and choreographic – which, however, declare the same roots and the same values.

From ancient Armenian melodies to Parthenopean romanzas, from a great tribute to Opera, the pride of Italy in the world, to Hispanic folklore, to the Americas of Gershwin, but also of Piazzolla, to Haiti’s voice: a 360-degree journey, a sensorial journey to the discovery of that beauty that humanity seeks to locate, wherever and in any form it may show itself.

In this wonderful show, which was attended by more than 12,000 guests (many of them coming from abroad), the ‘Voices of Haiti’ have perfectly got integrated … Twenty months from the operational start of ABF musical project (in collaboration with Fondation St Luke) a visionary idea has turned into concreteness, in the reality of these sixty very young ambassadors, ready to tell of their land and to make it loved in the world.

Contrary to his desire not to speak on stage, Andrea has greeted the audience («To be here, in the land where my father and all my family were born, is an incredible joy for me, and I cannot describe it ») and wanted to introduce personally the choir: ‘To this joy is added the one of having the choir of Haiti children here! To live in the idea means to think possible what is apparently impossible: a great thinker said so; I did not say it. But obviously it is true, remembering where these children have come from, and where they have been until recently. Today, they are here with us, they can sing, they have learnt to know a different world and, returning to their country, they will tell of this dream. A dream that will spread like oil, because – we all have learnt it – very often dreams become reality.’

Among the protagonists of this ‘Canto della Terra’, the magical voice of the Russian pop star Zara, the return of the greatest living baritone, Leo Nucci, the great Bolshoi solo soprano, Dinara Aliyeva, the absolute Queen of Classical Dance, Carla Fracci, the world’s most fascinating keyboard pianist and virtuoso, Lola Astanova, and a very special ABF volunteer, who has the profile of a heart breaker actor, and a voice with a remarkable resemblance with the one of his father, Matteo Bocelli.

And then, along with our choir directed by Malcolm J. Merriweather, the superb, superb, superb, voice of Emeline Michel, a Haitian artist who in many countries is a real star (and we hope she will be a star, from now on, also in Italy), appreciated for her original style that blends pop, jazz, blues and traditional Haitian rhythms.

To give concreteness to the memory of Haiti, telling of its charm and of what it leaves, in the heart of those who have traveled through it, we would do it with one of her performances: Emeline is the voice of Haiti, extremely beautiful, irregular, spectacular … With her regal and unreachable pride (which, however, melts in maternal and smiling warmth when it is encircled by our young singers) is a living metaphor of the Caribbean country and of its charismatic energy.

Before performing, along with the choir, “Ayiti Cheri” (Haiti Chérie), a patriotic song considered a sort of second national anthem, Emeline Michel wanted to thank Andrea and all the public, for ‘the sense of hope they are giving, for the seeds of light they are planting, and especially because all this is offered with a great sense of dignity’.

It is art, the true alchemy, the great ally in life, the human expression that allows to give birth to dreams, to think (and make possible) the impossible. This extraordinary evening, along with great artists and with the Haitian Voices, is of it, a further, festive, brave demonstration.

All the music of the world, when genuine, is ‘popular’; every artistic expression is a song dedicated to our earthly home that hosts us along the journey of life. Out of rhetoric, beyond the slight chromatic and somatic differences, we are simply brothers; we are variations on the same theme: we all are music of the same score.