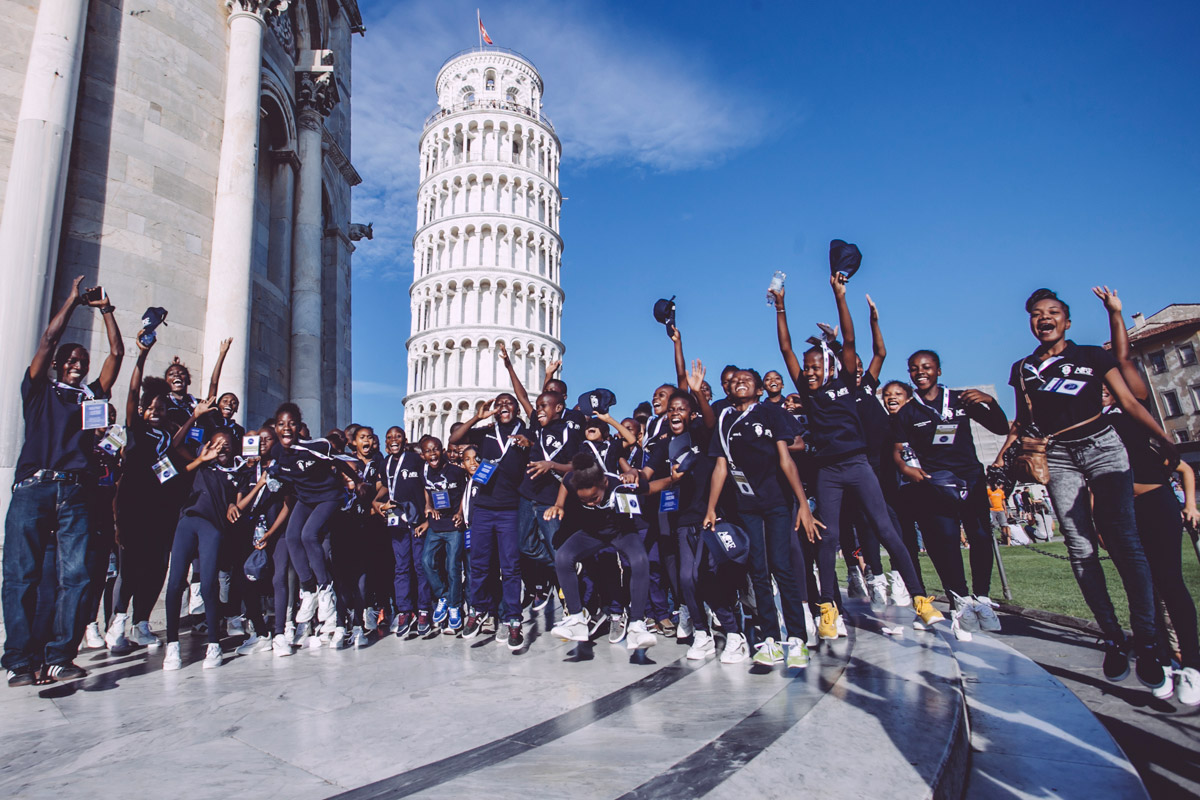 It is the day when the mosaic is reassembled, when the team meets again, and the group is completed. The Haitian representatives join the Italian ones and also those who have come from all over the world to offer their support. To summarize it in a word, this day of study and leisure, of curiosity and astonishment for the first ancient Italian wonders visited, sharing rest and food, would suffice an adverb: ‘together’.

Together, to perfect the performances of the forthcoming events, together (ABF staff and volunteer friends) to discuss complex projects, to deal with delicate and important subjects, and at the same time take care of simpler and more necessary things, like envelop hundreds of ferforgé, manufacts, artisan artifacts made of recycled metal sheets (simple, beautiful and full of solar symbolic meanings) that will be distributed in Lajatico, during the Teatro del Silenzio, for a small donation.

The headquarters building is just steps from the sea, surrounded by a large garden and shaded by a pine forest. On the upper floors, the rooms where the kids have tried to make the most of the night, sleeping, despite the insidious change in time zone; on the ground floor a large space for music auditions, a patio, a bar, a dining room, and a room dedicated to tailoring, where the concert uniforms have been hung.

The Bocelli family has come to celebrate the sixty young voices and the Haitian staff accompanying them: Virginia is cuddled and lovingly hugged by this group of elder brothers and sisters… Certainly unexpectedly, a bizarre two-legged spectator joins the party: a hen – the new little friend of Virginia – named Pavoncina, who lets herself to be caressed, becoming fatally the attraction of the choir at the end of the rehearsal.

After lunch, the rest time for the choir members corresponds, for adults, to the – just as precious one – for planning as well as for conversation. So, we can deepen the knowledge of Rhona and Olympia, who have been for over 20 years make-up artists for Giorgio Armani in the United States. From Miami, they have flown to Tuscany to give their contribution, to give their high professionalism to our young artists.

During an overseas fundraising event for ABF,” Rhona and Olympia explained: ‘We were literally dazzled by the warmth, the intensity of solidarity that this project had managed to move. Given that we are convinced it is vital, in the journey of life, to be always ready to return the good we have received, we took the initiative and came to Italy to give our contribution. The encounter with these children was pure joy: the joy we saw in their eyes was the same we felt … One more reason to be sure we were (and we are) in the right place … And that this is just the beginning of a long journey of affectionate mutual knowledge, with ABF and with Haiti’.

In the afternoon, after a few minutes by bus, in front of us is- amazing as always, with its leaning tower – the exuberant, exotic, mysterious, student, poetic, bold city of Pisa, with its scenic Campo dei Miracoli, designated by UNESCO as Heritage of Humanity and with its leaning Tower, the bell tower built between the twelfth and fourteenth centuries (inclined due to a collapse of the land already under construction), which is among the seven wonders of the modern world, next to the Chinese Wall and to the Indian TajMahal.

The magical rectangle, melting pot of innumerable predators of amateur photographs, now is adding to the green of the lawn, the dark blue of ABF uniforms and the white light of the smiles and eyes wide open of those wearing them.

Thanks to the sensibility and kindness of the Opera Primaziale Pisana, an unforgettable and exclusive visit to the square and to its monuments has been made possible. So our vocalists have been guided to discover the treasures that lie thirteen kilometers from the sea, on the immense lawn of the ancient Marinara Republic: as an ideal architectural dream come true, here is the Baptistery with its stylistic stratification between Romanesque and Gothic, (where, exceptionally, the choir was able to sing a canon – “Jubilate Deo – thanks to the exceptionally rich acoustics – and then the Duomo with its treasure of paintings (also By Andrea del Sarto and Beccafumi) and sculptural wonders, such as the 14th century marble pulpit by Giovanni Pisano.

Before closing the day at the pizzeria, our appetite had been stimulated by the three hundred steps necessary to climb that triumph of curvature: fifty-five meters high for fifteen thousand tons of weight and over two and a half meter slope for the most famous tower in the world, from whose top you have the beauty and the vertigo of an unforgettable panorama.

But equally unforgettable, indeed on top of the emotions of the day, the fascination of those sixty voices, singing a polyphonic prayer in the Baptistery of St. John, scaling the dome and blessing a blessed place … A perfect metaphor of a love encounter, an adverb – ‘together’ – that was vibrating mixing, harmonizing the breath of many young lives, avant-garde of the future of the Caribbean island, and Italian art and history, and a marvelous marble dream (of faith and beauty) conceived nine centuries before.